As my partner and I head home through Manchester’s Victoria Station, we notice there’s a bigger police presence on the concourse than usual, and not only of the two-legged variety.

Amongst the throng of shoppers heading home and partygoers venturing into town is a beautiful black Labrador who’s working as part of the British Transport Police Dog Section. We can’t resist going over.

Fred, who’s part of the explosive detection dogs’ section, turned two in March, and as his handler Steve informs us, we’re far from the first to stop and say hello.

“He has people coming up all the time. If we’re just walking around the station and not doing a particular search, we’ll say hello to people, and the railway staff love him even though he’s got a reputation for pinching sausage rolls. It’s something in Labs you can’t untrain, they love their food.”’

As a star attraction. Fred’s already received lipstick kisses all over his head from a group of revellers earlier that day. 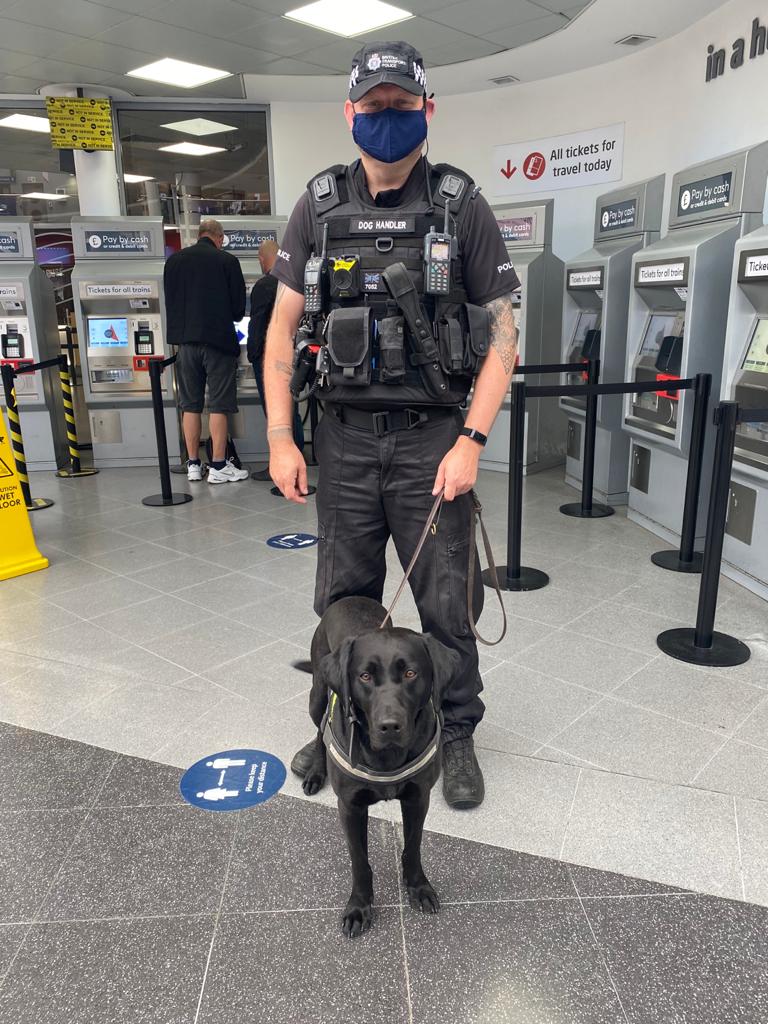 “Sometimes I feel more like his PA and chauffeur, and just stand there on the end of the lead while he gets all the attention,” quips Steve, who’s clearly besotted with Fred (‘he’s my best friend’), and the feeling is mutual.

“He’s regularly groomed, which makes his coat shiny, and he gets so many compliments about how nice he looks, but we’re strong believers police dogs should look the part. You don’t want to see one with their hair matted, or overweight, so we do make them look the perfect breed, and they do get very well looked after,’ says Steve, who joined the British Transport Police, a national special force that patrols railways, stations, and light-rail systems, in 2005.

“I started off in Manchester, moved on to Preston, then Liverpool, and then applied to join our Northern Counter Terrorism Unit. After that, a position came up for the dogs, which is what I’ve always wanted to do. That was last year, so I’m pretty new to dog handling,” says Steve.

When I catch up with him a few weeks later, he and Fred are half-way through a four-week training programme on passive detection in London, which involves scanning people and bags.

“We’ve always had dogs in the family, for as long as I can remember, so you go into the job thinking, yeah, I know about dogs, and you soon realise you know nothing. I mean, the things they teach you is unbelievable so there is a lot to learn,” says Steve who notes that what is more important initially is whether you have the right temperament to be a handler.

“They need to see you won’t get bad-tempered if the dog doesn’t do what he’s supposed to.”

Much like guide dogs for the blind, the force has a puppy scheme in which volunteers are handed a young dog to look after for 18 months before they begin their training.

“Fred was actually brought up by my chief inspector, so I had an idea I was getting him, but on that first day when you’re officially allocated your dog, it’s a bit like having a new baby, it’s a big responsibility,” says Steve. 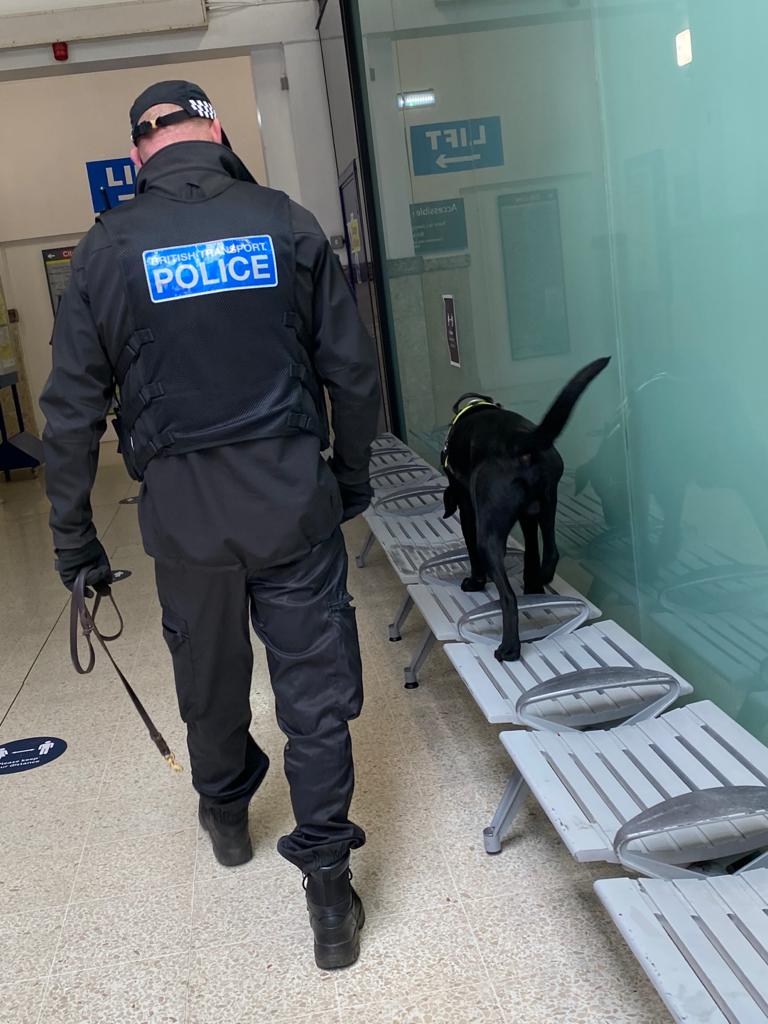 “Straight away, you’ve got to start forming a bond and that’s by being with them as much as possible, playing with them, and grooming them, but it’s a particular procedure, not just grabbing a brush and combing them.”

He remarks that there is something special in the fact you and the dog both start out new to the training.

“You progress alongside each other for the 12 weeks and start with a dog that doesn’t know what they’re doing, and by the time you’ve finished your training they’ve evolved into this working dog that can sniff out drugs, firearms, explosives, whatever we’re asking them to do. There’s a real sense of pride,” notes Steve who covers a lot of the north.

“It can be Newcastle one day, Liverpool the next.”

It’s why no two days are the same in their line of work, with shifts depending on the task at hand and the location.

“We’ll go to train stations, sometimes on the trains, reassuring the public and staff by being a highly visible police presence. We might get tasked with a particular event, there might be a VIP moving or member of the royal family, so we’ll go to a location and search and make sure it’s safe and sterile,” explains Steve, who highlights that “humans have five million scent receptors in their nose, and dogs have 250 million”.

“With passive searches, you don’t just go up to a person. If Fred recognises a scent, whether it’s firearms, or explosives, he’ll indicate it to me. I can’t tell you how he does it (for security reasons) but there is a lot of training for both of us. If we’re searching a building, he’ll be into absolutely everything because he knows there might be something in there for him to find, and then when he finds it, he gets his ball. It’s all about the ball, he loves it.”

Each morning, Fred likes nothing more than an amble in the woods near their home “and to say hello to his duck friends on the pond” but as soon as his harness goes on, he knows it’s time to work.

“That flicks the switch, and they know to go into work mode then, so he’ll be a completely different dog. It’s very clever,” remarks Steve.

Even when they’re not working, they’re always together.

“Wherever I go, Fred goes. The only time he isn’t with me is when he’s in his kennel and asleep. It’s got to the point that if I go somewhere and Fred isn’t with me, it’s like something’s not right. But they need that bond as well, so you become a very strong team.”

It’s why when it’s time for Fred to retire in seven or so years, there’s no doubt Steve will be keeping him rather than have him rehomed, which is an option. “Before he retires, you’re given a new dog, so the two overlap and the new one is all ready to go. But for Fred, after all the work he’s done, he’ll deserve to take it easy.”

Where it all began…

The British Transport Police was the first force in the country to employ dogs. In the early 1900s, it was Superintendent J Dobie of the North Eastern Railway Police who heard about their effective use in Belgium and ordered a similar scheme to be set up in the UK.

In 1908, four dogs by the names of Jim, Vic, Mick, and Ben began patrolling Hull Docks. There are now over 60 dogs used across the nation for general policing, as well as drugs and explosive detection.

If you’d like to support retired police dogs, you can visit the Rail Dogs Fund, an independent fund associated with the British Transport Police.