We can all agree there’s no better feeling than seeing your dog wag its tail in excitement after a good old belly rub.

But after pet owner Sarah Brown, from Suffolk, stroked her Kangal Shepherd with moisturised hands, her dog suffered a seizure and needed emergency treatment.

It was thought six-year-old Blondie had been poisoned, but as she had not yet been taken out on her daily walk this was quickly ruled out.

Instead, the vet said it was “very likely” Blondie had suffered a severe reaction to the cocoa butter hand cream Sarah had applied on her hands that night.

This is because the scented cream contains theobromine, otherwise known as xantheose, which is toxic to dogs.

Sarah said she discovered her four-legged friend in another room collapsed on the floor after sharing a ten minute cuddle with her.

The dog’s face was swollen and her skin had turned “neon pink”.

Sarah has taken to social media to warn other pet owners about her dog’s potentially fatal allergic reaction. 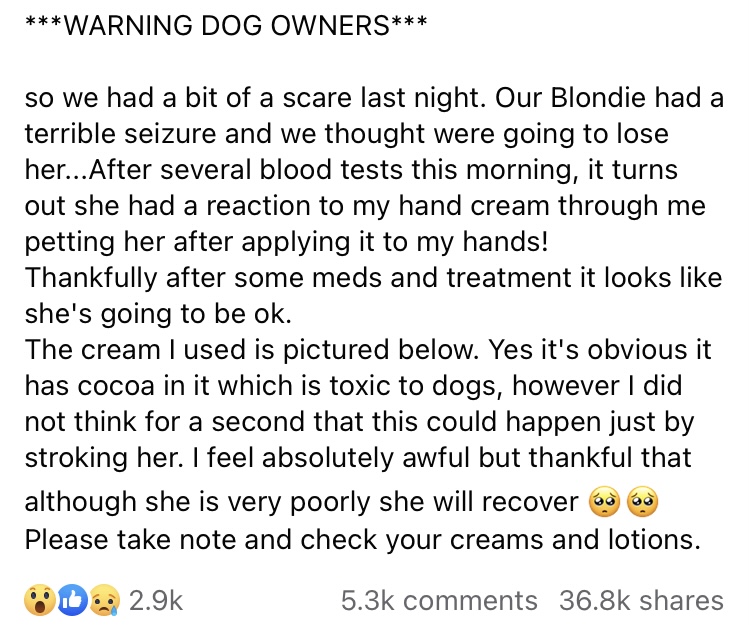 Recalling the scary experience, the 39-year-old said: “I felt awful. I thought I had killed her and when the penny dropped that it was my fault and could have been avoided, I felt even worse.”

It took Blondie, a rescue dog from Turkey, five months to make a full recovery.

Since the incident, Sarah has changed creams and double checks every label before adding an item to her shopping basket.

Joe Inglis, Vet and Founder of VetChef said: “When you cook chocolate it increases the amount of a compound called theobromine in it which is similar to a compound found in caffeine.

“Cocoa butter will make most dogs very sick or have terrible diarrhoea and wind.However the theobromine can cause fits in some dogs and abnormal heart rates. That can be fatal.”